Why I Won’t Be Getting Mother of the Year: Layers of Understanding

I used to believe that clarity was epiphanic.  As in, you don’t understand and then –presto whammo! –  you have an experience,  an epiphany, that brings about full insight and you are that much wiser for it.  I know better now.  Parenting a child with special needs is good for that, teaching you all kinds of lessons you never volunteered to learn.

I now know that understanding is multi-layered.  Clarity comes in concentric circles.  Just when you think you have come to a level of peace and acceptance, something occurs and you realize that there is a whole deeper level of understanding with which to contend.  This is how the painful and stressful stuff gets you.  It peels back another layer, and there you are again.  I’m beginning to understand this a bit better now.  Realizing that true understanding, acceptance, and sometimes grief are forever cycling, beginning again with each new layer revealed.   Comprehending that the things I am worried about now with regard to my special needs child will simply evolve into more complex facets of themselves.

A week ago, we took our kids on our first road trip to visit family in North Georgia.  It was a 8 hour car ride and things had been going quite well.  Callum was so easy-going, happy to look out the window, stim, babble, and giggle.  Bronwyn christened us into traveling parenthood with endless bouts of “Are we there yet?” – which, at four, is not unexpected.  I found an awesome classic country station on the radio and got my southern belle on belting out fun singalongs like “Living on Tulsa Time” and “Family Tradition”.  I felt normal.  Positive.  High-spirited even.

Just a couple of hours away from our destination, Sean and I decided to break for lunch.  We chose a McDonalds with a play area – determined to allow the kids some time to run their little legs off a bit.  And it was a really nice play area – sectioned off, indoor, safe, complete with tables and even a toddler zone.  Even the parents were all nice – smiling at others and encouraging their children to be careful with the littler ones.  It should have been ideal.

But soon Callum began attempting to climb up the main slide from the bottom.  He didn’t understand he needed to go up into the maze and slide down.  He was obviously too clumsy to do that anyway.  He climbed up a bit – and just sat in the middle of the “hamster tube”, partially blocking the children so anxious to get around him.  My husband and I were too big to crawl up to get him out, so we had to verbally encourage him to come down.  We directed him to the toddler zone, where his clumsiness became obvious.  He did figure out that he needed to climb the plastic ramp rather than the slide, but it took many tries.

Then a couple of sweet kids came up and attempted to engage with him.  He smiled in their general direction and backed into a corner, flapping away and making odd vocalizations and facial expressions.  And I saw, for the very first time, the strange expressions on the faces of those children – who were realizing there was something different about him.  They didn’t even back away.  Bless their little hearts, they again attempted to engage him before walking away, looking back curiously.  There was no malice, just an awareness of his otherness. 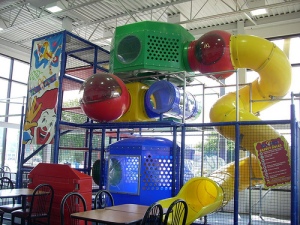 And then Callum took an interest in all of the tables nearby.  He started walking up to them, reaching for their food and drinks.  All of the parents waved away my apologies and smiled at Callum, flapping away.  Not one single soul rudely stared or showed any kind of disapproval.

But I noticed.  Oh, how I noticed.  I saw the future – Callum, so happy to be in the middle of such fun, yet not knowing how to join in.  These children, a bit older and less tolerant of his differentness.  The smiling parents, no longer able to dismiss his odd behaviors as being due to his age, relieved they aren’t in our shoes.  I saw the future in the past I have already (due to family and professional experience) seen before.  And it hurt.  One more layer of understanding revealed.  And the realization that there are so many more underneath, also waiting to be discovered.

All the while, my daughter was pressing her little face against the “hamster tube” sides calling out, “Mama, look at me!”  At one point in our concern to get Callum out of the maze, I lost sight of her and panicked.  Only to find her in a tube, making silly faces to get my attention.  A moment frozen in time —and yet another layer of understanding revealed.

I had to get out of there.  And, in doing so, I didn’t do such a great job of warning my daughter of our impending departure.  It was sudden, and she was having fun.  So, she threw the mother of all tantrums.  And, in her howls of protest, I heard all of the future injustices that will be perpetrated upon her.  When she needs our attention, but it must – by some necessity – be directed to her brother.  When she wants for all the world to have a special moment – to have it ruined by her brother.  When she actually realizes her brother isn’t really a baby and cares what her friends think.  I know she’ll survive it and be a better person for it.  But she, too, has hard times and lessons ahead.

Something in me broke amidst the chaos of that play area and my daughter’s screaming.  And I committed another injustice upon her.  In the middle of angrily trying to drag her out of there, I thought she had picked up another child’s toy and demanded she leave it behind – not realizing or listening to her crying that it really was hers, a toy from her Happy Meal.  I made her leave her My Little Pony on the table, desperately trying to escape that room.  I won’t be getting Mother of the Year for that. If it hadn’t been for my husband realizing I was unhinged and sorting it out, her toy would have been left behind forever – creating a memory I’d rather she not have.  (I don’t begin to know how single parents do this and survive mentally intact.  I guess, like all parents, you just do what you have to.)

In the car, I attempted to recapture the mood, but I could no longer find that station on the radio.

So I look around me at all the things I worry about now – communication, socialization, cognition at the preschool level– and am reminded that, with each challenge met and each new phase of development, that there will more and more layers of worry revealed.   Yes, he may develop speech, but will he know how to converse?  Yes, he may converse, but will he have friends to talk to?  Each concern will become more complex as he grows.  And I’m clearly going to have to do a better job of getting a grip.

For, unlike it is portrayed in books and film, clarity isn’t always patient enough to wait around for its owner to take out her journal, drink wine with a group of witty and insightful friends, or have an epiphany in the safety of her therapist’s office.  Sometimes clarity comes screaming up to you and knocks you over at the playground, the grocery store, or waiting for the light to change.  And there is nothing to do but reach in and remove the outermost layer, take a good look at it, keep calm, and carry on.  Somehow I’m going to have to steel myself to not flee from the playground.  Because, truly, the only person actually upset was me.  Worried about pain that has not yet come to pass – and in doing so – forgetting to relax, breathe, and simply live.  To not sweat the little things.  To climb up the slide backwards.  To crank up the radio.

So this morning, on classic country, I hear Conway Twitty’s ragged baritone take on new meaning:

It’s the…soul afraid of dying – that never learns to live.  – “The Rose”

Posted by FlappinessIs on March 17, 2012 in A Day in the Life and tagged clarity, conway twitty, playgrounds, the rose.

What do you think? Cancel reply